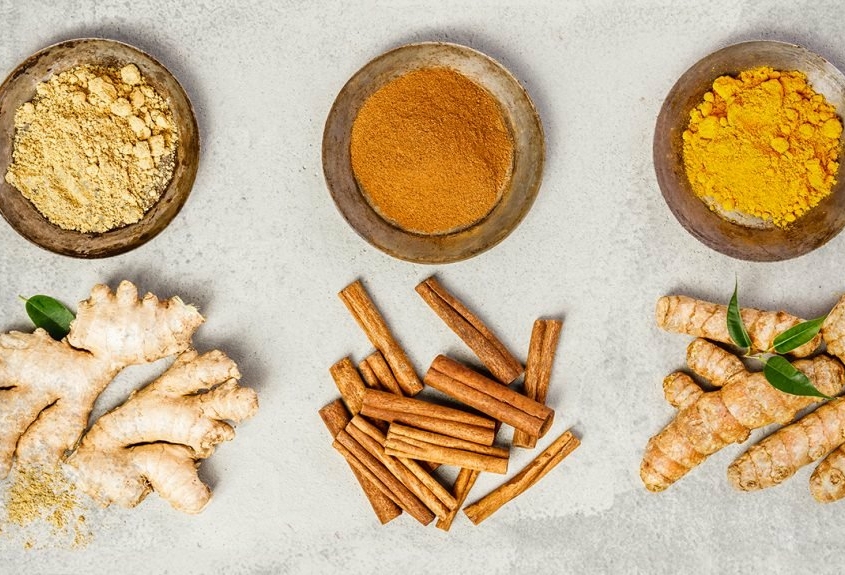 Throughout history, herbs and spices have been used all over the world- not just to make our food taste flavorful, but many of them have been long celebrated for their medicinal properties. Before modern medicine, communities and civilizations used resources derived from nature to promote healing and overall well-being- everything from healing wounds to preventing and treating illness. Here are 7 commonly used herbs and spices, supported by research, with surprising health benefits!

Cinnamon provides a myriad of health benefits as an antioxidant, anti-inflammatory, antidiabetic and anticarcinogenic spice. In recent studies, cinnamon has been shown to reduce blood sugar levels in those with type 2 diabetes. In addition, cinnamon has also been shown to reduce cholesterol and triglyceride levels, which is especially important for those with diabetes who are at greater risk for cardiovascular disease. Try sprinkling cinnamon on your oatmeal, yogurt, or even in a pot of chili or as part of a meat rub.

Turmeric has become a trendy superfood, known for its ability to reduce inflammation- a common cause of disease and pain. Because of its anti-inflammatory properties, those who consumed turmeric regularly experienced reduced pain and swelling in those who suffer from arthritis. Some studies suggest that curcumin, a substance from turmeric, has even been shown to reduce inflammation in the brain. Inflammation in the brain lead to conditions like Alzheimer’s disease and depression. Turmeric is delicious in any curry dish, but can also be rubbed on meat and vegetables.

Oregano is most widely known for its high levels on antioxidants that prevent free radical damage and strengthen the immune system. Oregano contains a compound, carvacrol, that is effective against the cold and flu virus. Another common use for oregano is the treatment of digestive issues like bloat, irritable bowel syndrome, chronic diarrhea, bacterial-overgrowths such as SIBO (small intestinal bacterial overgrowth) or Candida. Since it is antimicrobial, it can be extremely effective at shifting chronic digestive issues over time. Dried oregano can easily be added to soups, sauces or even in a rub on meat or vegetables. Some, for added health benefits, will consume dried oregano steeped as a tea.

People around the world have been using ginger for thousands of years as a remedy for gastrointestinal issues. Gingerol, a natural component of ginger root, encourages efficient digestion. In-efficient digestion can be associated with symptoms like bloat, nausea and gas. Fresh, peeled ginger root steeped in hot water is an excellent remedy for stomach upset- but can also be used to flavor soups, sauces and is a delicious in a meat marinade.

The cocoa bean is full of flavonoids, which are antioxidants that have been shown to improve heart health. Flavonoids also contribute to lowering cholesterol and blood sugar. A key note: the healthiest form of cocoa comes from raw cocoa products that are made from dried and unroasted cocoa beans. Dark chocolate with at least 70% cocoa is a good source of these beneficial antioxidants- of course, consumed in moderation.

Peppermint has been shown to be an uplifting herb that boosts the mood, improves focus and increases energy. Peppermint is also used as relief for cold and flu symptoms like clogged sinuses, respiratory discomfort and can even be soothing for a headache or migraine. Like ginger, it has also been used to relieve gastrointestinal issues like nausea. Peppermint is widely enjoyed as an herbal tea, preferably before or after a meal to aid in healthy digestion.

Rosemary is rich in antioxidants that prevent cell damage. It is also considered a cognitive stimulant. Even just a sniff of fresh rosemary can be beneficial- a study showed that those who got a whiff of rosemary performed better on memory tests compared to those who did not. Another surprising benefit of rosemary is that it has been shown to promote hair growth, prevent baldness and treat dandruff and dry scalp! Rosemary is a delicious herb in a pot roast, casserole or seasoned over roasted potatoes.